For many people the word “paradise” conjures up sandy beaches, tropical islands and palm trees. However, when you are a mountain lover, a hiking fan or a snow freak your idea of paradise may as well be a tad different. Actually, it could look a lot like Andorra. This tiny princedom of just 468km2 hidden in the heart of the Pyrenees – bordering France in the North and Spanish Catalonia in the South- can boast of 300km of skiing slopes, 65 peaks over 2000m –the highest being Comapedrosa with 2942m-, and an amazing scenery – 90% of the territory is preserved- which changes completely from winter to summer, creating two different worlds.

The territory is divided in 7 parishes (Canillo, Encamp, Ordino, la Massana, Andorra la Vella, Sant Julià de Lòria i Escaldes-Engordany) with mountain villages and no less than 44 Medieval Romanesque churches scattered around them. 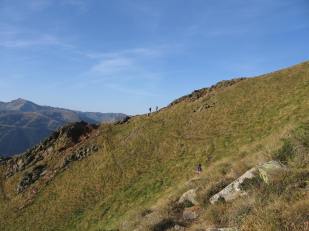 Six GR trails crisscross the country, making a total of 300km of footpaths, 3 of which will take you across the UNESCO World Heritage Natural Reserve of the Madriu-Perafita-Claror Valley. The GRP Andorra is the longest of all, 120 km, and circles the country in 4 stages. These trails can reach 2600 m at some passes, like the Pessons Col or the Sant Antoni Pass in GR 7 or the Baiau Col in the mythical GR 11 (the 800km trail that crosses the Pyrenees from the Mediterranean to the Atlantic Ocean) and of course, the Haute Randonnée Pyrénéenne (HRP), which emulates the GR11 following a high course through the mountains and cols. 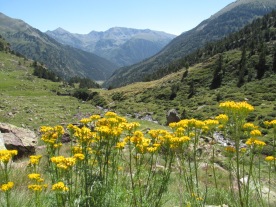 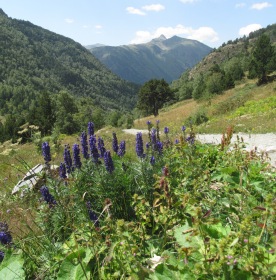 Andorra keeps a net of 26 well kept mountain shelters for hikers – 3 of them staffed and the rest free (see a map here). Among the first, I have visited the Refugi Borda de Sorteny (www.refugisorteny.com) both in summer and winter. It is located in the middle of the Sorteny Valley Natural Park, at the foot of the Estanyó and Serreta Peaks and lakes. And in summer the valley is a wonder of greenery, vegetal life and flowers. It has a terrace with a magnificent view of the surrounding mountains to sit and enjoy a beer in the sunshine after a hike up the lakes.

And then, there’s winter. Being a person fond of hot summers and tropical weather I must confess Andorra made me fall in love with winter. Definitely, if I could live in Andorra I’d embrace winter. “Release the white ravens! Winter is coming” is a sentence that here will put a smile in many faces. And the reason is snow.

Under a white cover of almost 2 metres deep a trip to the green Sorteny becomes a hike under the moon with snowshoes and a raclette diner by the fire. You can sleep there (it has 5 comunal bedrooms) and head up to the summits or the lakes in the morning.

In winter the Ordino road (that takes you, among others, to the trail to Tristania Peak and lakes) just vanishes to become the Megaverda, the longest skiing slope in Europe (8km). Already beatiful on a sunny day (as you can see in this astonishing 360º view on google), under the moonlight the scenery shines with a magical silvery glow; time to get there either by foot (mandatory snowshoes or skis) or on board the Gicafer, a retrack caterpillar vehicle that can take up to 14 people in its two cabins to Port del Rat (2500m) and to a totally unexpected forest of ice stalactites and stalagmites inside an unfinished tunnel (the story goes the French never drilled their side as it was intended). You can choose to have diner at La Coma before heading down to one of the villages to sleep.

From summer to winter: 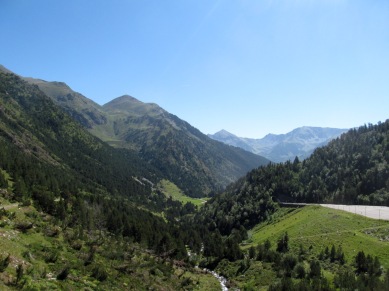 Summer: The road to Ordino 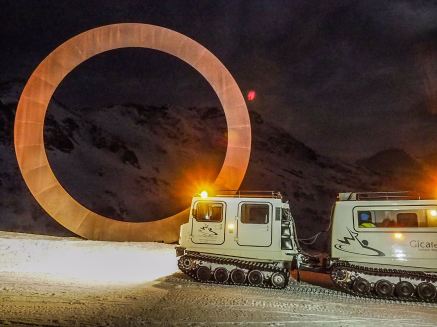 As for sleeping, in Andorra I have slept in mountain shelters, in huts, in camping sites and in a 5 star hotel. So take your pick. 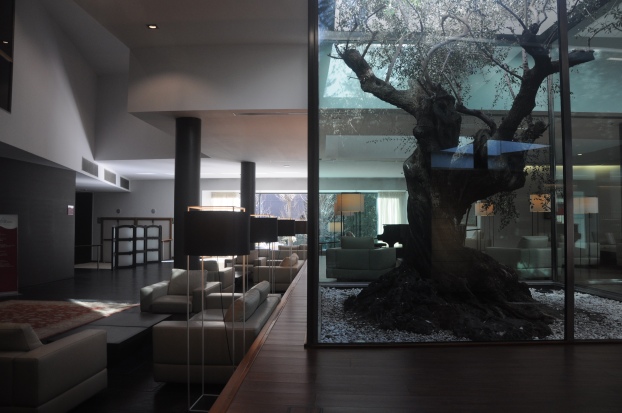 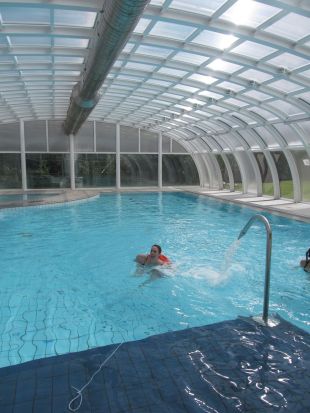 Ski stations are not just for skiers

I never learnt to ski as a kid (the best time to learn on my opinion) and I never tried as an adult – only Nordic Skiing and I decided I was happier with snowshoes or crampons on my feet to move on the snow. But not skiing does not mean there’s nothing for you at the ski stations. Recently I discovered a whole world up there.

There are 3 domains in Andorra, in 3 different areas of the country. Vallnord (with 70km of slopes divided in two sectors), Naturlandia (the most familiar option with an animal park and some attractions like the Tobotronc, the longest forest toboggan in the world, and a Nordic Skiing run of 15 km) and Grandvalira (the largest domain in southern Europe, with 210km of skiable terrain divided in six areas and 128 ski slopes -including 4 competition tracks, 3 freestyle areas, 5 mountain ski circuits, 5 children areas and even a Igloo hotel made entirely of snow at 2350m).

All ski resorts in Andorra are very well connected in terms of transport. Roads are excellent and there are buses going everywhere, but for me nothing beats the cable car. You can climb up to Pal-Arinsal sector in Vallnord from La Massana  village in one of the red cars while enjoying the magnificent views and avoiding road bends. It’s quick and its fun. 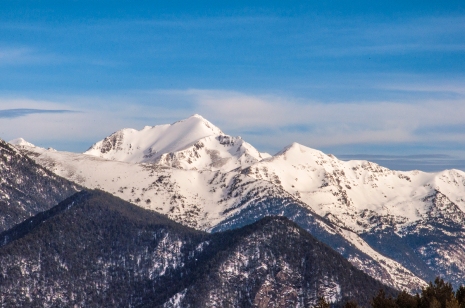 The landscape in Andorra

So, what did I do there to pass the time if skiing is not an option for me? In Vallnord I had the change to do one of those things I had always wanted to do: Mushing. Yes, I rode a dog sled through the forests of La Massana and the Botella Saddle. It was amazing. I had to resist the urge to hug all the dogs in the camp. Needless to say I love dogs. 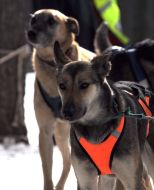 And then I took a chairlift to get to Pla de La Cot Restaurant & Ski Lounge and enjoyed an excellent lunch with breathtaking views. Really good food, local meats and mushrooms, surprising assortment of wines… straight into my list of restaurants to recommend. 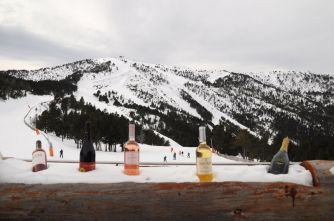 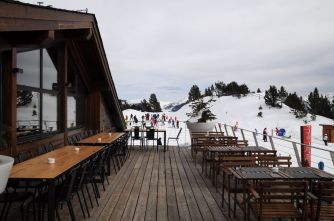 In Naturlandia, at the parish of Sant Julià de Lòria, I gave another chance to Nordic Skiing –not my thing, definitely, now I know for sure. But I have to say the instructor from the station was very patient with us. And also that seeing all the small kids move around with ease was kind of frustrating – I was jealous. I wish I had learnt this at their age. If I had kids I’d bring them here for some classes (as long as they wanted to, of course). 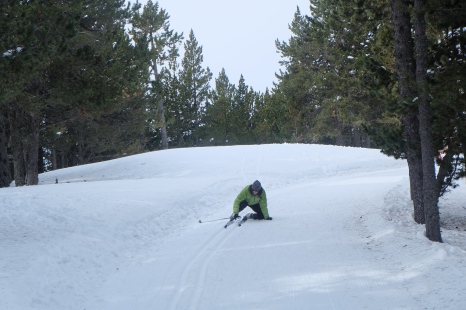 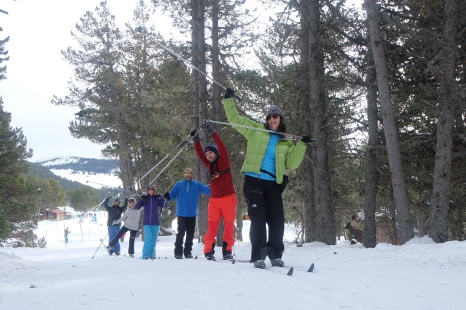 After taking our skis back to the rental place we took a walk by the Animal Park Cota 2000, an animal reserve integrated in the landscape inhabited by some Pyrenean fauna (brown bears, wolves, deer, lynxs, mouflons and such). A pity the tobotronc, one of the main attractions in the station, was close due to the accumulation of snow in the rails. A 5.3 km journey through the woods on a 2-seater sled to make a 400m drop is something worth trying – guess it’s safer during the summer then. 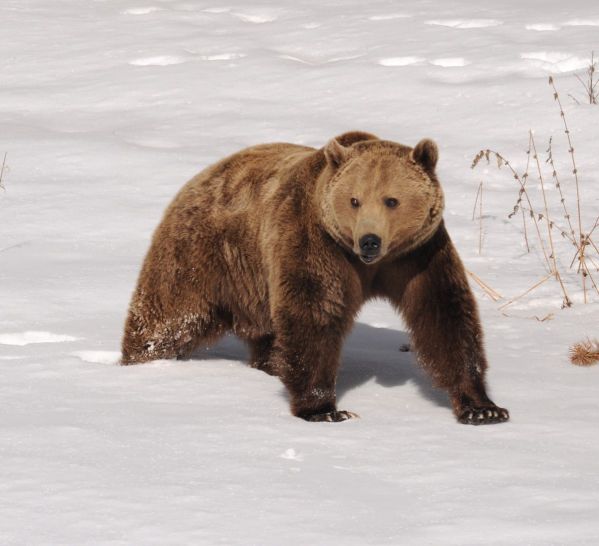 And finally, Grandvalira, the big one. We got there by road this time, the road that crosses into France through the Envalira tunnel (from here it’s 861 km to Paris), up to the area of Grau Roig. Here, among all the choices available (from archery and paintball to paragliding) we chose snowmobiles, igloo building and tubbing.

Snowmobiles are fun and easy to ride. We had a guide from the station to take us through the forest and clearings of the Grau Roig area, stopping to enjoy the scenery and swap places at the wheel. I wished I lived in a northern country and had one just to go shopping for groceries. You know what else is fun? Sliding down a slope on a giant inflatable doughnut! It may look like a kid’s activity, and indeed, there was a lot of kids around but hell, I didn’t care.  My inner child was happy, very, very happy. 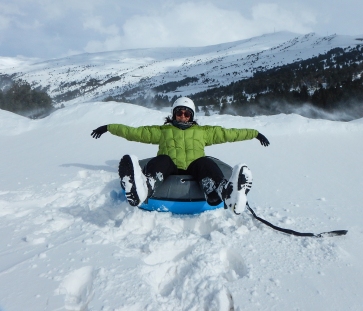 And of course, there is more to the country than just nature, mountains and snow (in case that was not enough). When you get down from the heights after a day of trekking, skiing or whatever, these are probably two of the most popular things to do: First, Andorra is a shopping destination for many people south of the border. They come here to buy foods like cheese and chocolate, tobacco and alcohol, mountain gear (I actually purchased my green Marmot Down Jacket here a few years back) and clothes, pharmaceutical products, cosmetics and technology, mainly. And the second is Caldea, the biggest mountain thermal centre in southern Europe, with its 70ºC water – they have a kids-only space and an adults-only one.

And there are also some interesting museums, thematic tours, and, let me remind you, 44 Romanesque churches. 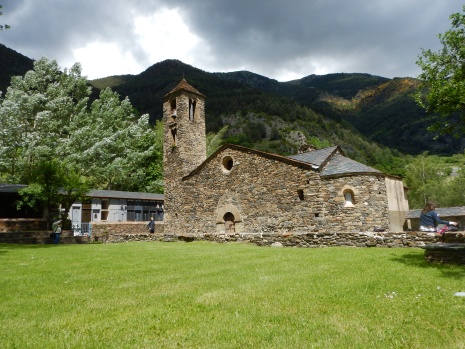 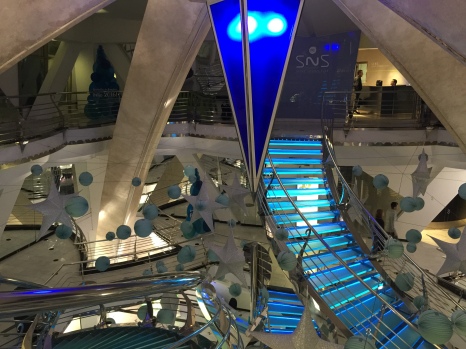 It may look like the inside of the Tardis but it is Caldea. Foto: Qtravel Magazine

A mention of honour for Andorran gastronomy, the result of a long tradition of mountain cuisine influenced by Catalan and French alike. 400 restaurants, some of them in reconverted country houses, offer local produce (like Andorran beef) as well as typical and modern dishes. The country also produces some local wines and beers.

So summer or winter, make your choice. I’d recommend both… And spring too, while we’re at it.

I’d like to thank Ana Escriche from Planeta Dunia and Àngel Bigorra, David Bigorra and Iván Soriano from QTRAVEL for allowing me to use some of their photos here (and for their excellent company on my last visit to Andorra). And Montse Buil and Irene Delgado from Visit Andorra for their wonderful hospitality.